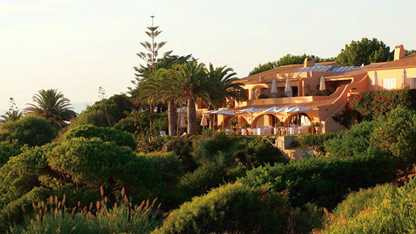 Vila Joya is a small charming hotel with a two Michelin Stars restaurant (since 1999). A special place overlooking the Atlantic, that few people know.

The Austrian Chef Dieter Koschina, in the Algarve since 1991, is responsible for the kitchen of this gastronomic space, which, combining techniques, quality produce and creativity, offers and exceptional know-how, providing customers with an atmosphere, which is as elegant as it is calm and relaxed.

Less well known is the fact that Vila Joya also functions as a small charming hotel, with stunning views over the sea, a stone’s throw from Praia da Galé and with direct access to a small beach, hidden amongst the rocks. It all started more than four decades ago, when Claudia Jung, a native of Germany, discovered a completely abandoned house and decided to make it her holiday retreat.

Converted into a small village in the early 1980’s, it made a name internationally, having won several awards. Only recently began it to gain supporters at national level.

Under the direction of the young and charismatic Joy Jung (the owner’s daughter), the truth is, that Vila Joya is a very special place. No one can imagine what hides behind the property’s yellow walls.

With just 13 rooms and suites, overlooking the Atlantic, with generous dimensions, each with a unique feature (outdoor pool, jacuzzi, bed overlooking the sea or flowered terrace), the Villa is surrounded by an immense lawn and beautifully landscaped gardens. The property has two pools.

The most recent creation was Vila Joya Sea, a bar with a beach restaurant. This space is open to the general public, not just houseguests.

It serves baguettes, tapas and crepes and can be a good way to have a first contact with Vila Joya (it only opens in the summer months).

If you want to go further, you have to arrange a lunch or dinner at the restaurant and try Koschina’s cuisine – well accompanied by a wine from the hotel’s secret cellar. You might even be tempted not to miss the next edition of the Gourmet Festival that Vila Joya has been organising since 1997, in honour of Claudia Jung, the founder. It is a unique and exclusive experience, which guarantees you excellent meals by the hand of guest chefs, great names of the world’s cuisine, with many Michelin stars and Gault Millau points…